ABOUT US
SERVICES & PRODUCTS
BOOK AN APPOINTMENT
CONTACT US

Some brands we carry

How we plan to keep you safe

Lang Optometry has implemented new procedures for when you visit our clinic, designed to ensure everyone’s safety. They include screening, reduced patient flow, social distancing and sanitization. They carefully follow the work guidelines for optometrists approved by the Nova Scotia Medical Officer of Health.

When you visit Lang Optometry & Eyewear:

Everyone must have a pre-booked appointment to enter the clinic.

All visitors must wash or sanitize their hands at check-in.

Everyone must wear a mask (cloth or medical) when entering and for the entire duration of the appointment.

Our doctors and staff will be wearing masks and even face shields, goggles and gloves for certain procedures.
The front desk is now behind plexiglass.
We sanitize all equipment and high touchpoint in the office above our usual high standards.
Regular office hours resume Monday, June 8, 2020.

We are looking forward to seeing everyone again….call us for your exam!

Our COVID-19 Protocol will be updated as needed in accordance with instructions from the Nova Scotia College of Optometrists and the Nova Scotia Medical Officer of Health.

Lang Optometry & Eyewear, located in the vibrant Hydrostone Market area of Halifax, actually began as Bayers Road Optometry Clinic.  Dr Gaétan Lang took ownership in 1993, and continued to grow the practice on Bayers Road until we moved to our present location in 2010.

With a bespoke, boutique-style space, came the necessity for a new name, since we couldn’t very well be Bayers Road Optometry located on Kaye Street! So we, Lang Optometry, were born.

Since moving to the Hydrostone area, we continue to provide professional optometric services to clients, as well as offer quality eyewear and sunglasses (prescription and fashion), with many brands unique in Halifax. When possible, we request area exclusivity from the designers we carry. That means chances are you won’t run into someone else wearing your frames when you are out socializing or at that need-to-impress meeting.

We take care in choosing the brands we carry, with Dr Lang making frequent international trips to source them. His favorite frames are the ones where he knows the designer, and the creative mind behind their artistry. In fact, one designer we carry has made most of Elton John’s glasses! (We have frames that are a little more “tame” as well.)

Our clients come from a wide area of Halifax, and beyond. We use new and state of the art optometry equipment but an appointment with us feels more like a visit with old friends than a medical appointment. So make us your choice the next time you google “optometrists in Halifax”. We look forward to seeing you!

Originally from Clair, NB, Dr. Gaétan L. Lang attended Université de Moncton before being accepted in the optometry program at the University of Waterloo, ON. After graduating as a Doctor of Optometry in 1990, he moved to Halifax, Nova Scotia and joined two local practices.

After practising for three years, the entrepreneur bug bit and he purchased Bayers Road Optometry. This is where he nurtured his practice and developed an interest in genuine, personalized patient care and stylish eyewear.

In 2010, the practice relocated to the Hydrostone District in the city’s North End and was re-named Lang Optometry & Eyewear. The new location and facility allowed Dr Lang to better serve his patients and more effectively showcase his avant-garde eyewear. Today, he is widely recognized for these within Halifax, across Nova Scotia, and beyond.

Being involved in the latest professional developments is integral to how he works. In 1998, Dr. Lang completed an ocular therapeutics course offered by the Pennsylvania College of Optometrists.In 2016, he attended a course presented by the University of Waterloo to further his knowledge of glaucoma and the use of oral therapeutic agents.Dr. Lang has also served on various committees of the Nova Scotia Association of Optometrists and has been asked to be a panelist for standards-setting workshops with the Canadian Examiners in Optometry.

Dr. Lang is an avid supporter of the arts, and a musician. He has played violin in the past with the Prince Edward Symphony and Chebucto Symphony Orchestra, and currently with Nova Sinfonia. He is a past board member of the Maritime Conservatory of Performing Arts and the Scotia Festival of Music. He currently serves on the board of String Music Atlantic. His home has been a refuge for many musicians over the years. He also enjoys travelling, attending concerts, spending time in his garden and antiquing.

Dr Lang is fluent in both French and English and is pleased to offer eye exams in either language. 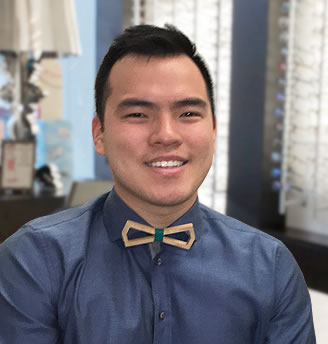 Dr Christopher Poh is the newest member of Lang Optometry, joining the practice in 2015.

Originally from Kingston, ON, Dr Poh began his undergraduate studies in Kinesiology at McGill University in 2008.  He then transferred to the School of Optometry at the University of Waterloo where he graduated in 2015. During his education, he had the opportunity to work with ophthalmologists at Houston Eye Associates, specializing in cataracts, ocular disease, pediatrics and oculoplastics.

Dr Poh enjoys all aspects of primary care optometry with a special interest in ocular disease, and works to ensure he provides the best possible care for patients and their families.

Outside professional work, Dr Poh enjoys volleyball, cooking, baking and is an avid amateur photographer. A recent transplant to the Maritimes, Dr Poh is excited to experience the ‘East Coast Lifestyle’ and to be part of the Lang Optometry family.

In addition to Drs Lang and Poh, the Lang Optometry staff is there to make sure your visit with us is easy, pleasurable and satisfying. From booking your appointment, to any follow-up, choosing frames, deciding on the best lenses for your prescription and making the final adjustments… everything we do has two purposes: to ensure your visit is a great experience, and that you receive the perfect product for your vision requirements.

We are grateful for the on-going support of our patients and clients many of which have been with us since our early years. We recognize that it is important to give back to our community and we have made it a priority to help community groups whenever we can.

Over the years, our support has included (but not limited to) the following groups: Scotia Festival of Music, Symphony Nova Scotia, Nova Sinfonia, Cecilia Concerts, the Chebucto Symphony

Orchestra, the Aeolian Singers, the Halifax Jazz Festival, the Blue Engine String Quartet, the Nova Scotia Youth Orchestra, the Youth Project, Halifax Pride, the Heart and Stroke Foundation, Unicef, Zuppa Theatre Co. and Keep Good (theatre) Company.  We also support the Maritime Conservatory of Performing Arts where the “Dr. Gaétan L. Lang String Award” has been presented to a deserving student at convocation every year since 2014.

Examinations
Complete and thorough eye exams for children, adults and seniors: We use the most up-to-date and sophisticated equipment to get accurate results and ensure that you will be as comfortable as possible throughout the exam. We make every effort to help you reach your full vision potential through our carefully done refractions. As well, we evaluate your eye muscles and check for eye diseases such as cataracts, glaucoma and macular degeneration. We take retinal scans so we can diagnose problems more easily and follow any progression of diseases accurately.  We are happy to accept new patients to our clinic and will help you obtain information from previous providers, if necessary. Call us first!

Contact lens evaluations and fittings:
We take care of basic prescriptions as well as those for astigmatism (toric) and bifocals. If you are currently wearing contact lenses, we will review and when needed, upgrade your lenses, cleaning regimen and wearing schedule.

Motor vehicle, police academy and occupational eye exams:
Often special tests are required for specific jobs and tasks and we will add those to the routine exam. Don’t forget to bring your forms and to tell us of your special needs when you book your appointment as we may have to spend a little more time with you.

Referral services to the appropriate ophthalmologist when necessary:
If a condition or a disease of the eye is diagnosed and you need eye surgery or medical care beyond our scope of practice, we will discuss your options in a compassionate manner and refer you to an eye surgeon or a specialist that will ensure your treatment is started as soon as possible.

Emergency Services
Red eye emergency services:
Whether you have an eye infection or a minor injury, give us a call and we will do everything possible to see you quickly or if necessary, redirect you to the most appropriate eye care facility.

How to book an appointment

We accept appointments Monday to Friday from 9am to 6pm, and Saturday from 9am to 3pm, so finding a time that fits your schedule has never been more convenient. But that’s not all – you can call us, send an email, or even book online (we have a select number of online booking slots available monthly). However you book, please ensure that we have information to contact you, as we may need to ask you pesky questions like who your insurance carrier is, or about any physical or medical conditions that impact your sight. We want to ensure you have the best outcome possible from your visit with us.

Before your visit, please see our COVID-19 Protocols listed here.

For your convenience, we have three ways for you to book your next appointment.

Yes. We still take good old-fashioned telephone calls. When calling, we will ask for information in preparation for your appointment. But if you don’t have it at hand, don’t worry. We’ll tell you what we need. Just make sure you come a little early and bring it with you when you arrive.

Send us an email

If you prefer, simply drop us an email using the link below. You will be asked for your name, email address and a short message. Make sure you give us your phone number. Once we receive your email we’ll call you back and get the necessary information to book your appointment.

If you’re the kind of person that likes minimal personal contact, we have a select few time slots reserved exclusively for online booking. The process is very easy, with available times clear and concise. If you don’t see a time that fits your schedule do not despair. One may be available, but you’ll have to call or email to find out.